Blue Mondays are a thing of the past. VIFF invites you to enjoy superb music related films with Vancity Theatre’s state-of-the-art projection and sound. Sit back, relax, enjoy a beverage from our licensed cafe and rock on. Remember, all tickets to Music Monday’s are $7 for Vancity Theatre members. ($2 annual memberships can be bought at the door on the day, or in advance online at viff.org).

Here’s whats happening in May… 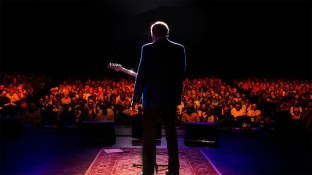 Glen Campbell: I’ll Be Me

Diagnosed with Alzheimer’s in 2011, legendary singer and guitarist Glen Campbell decided to allow actor-director James Keach access to follow him on what would become his farewell tour. It’s a doubly courageous gesture, and something that could have backfired easily – but backed by a band of family and friends, Campbell demonstrates he still has the musical chops to perform classics like Wichita Lineman and to carry the entire house with him. You will smile, you will cry, and you come away with a renewed appreciation for a remarkable man. BUY TICKETS

This much is true: they were the darlings of 1983. Spandau Ballet were the epitome of the New Romantic movement. Fashion, synths and attitude. They sold over 25 million records, scored numerous multi-platinum albums, appeared at Band Aid, and amassed 23 hit singles (including Gold) across the globe. They were one of the iconic super-groups of the 80s. So how come they wound up suing each other in court? Where did it all go wrong? This authorized doc doesn’t stint on the inside dope, with all five band members cooperating and reams of archival footage from London (and St Tropez, New York and the Bahamas) in the 1980s. BUY TICKETS

Like 20 Feet From Stardom this is the story of unsung heroes, the session musicians who made the 60s swing. Guaranteed, you will never hear pop from that era the same way again. Touching on everyone from the Beach Boys to Elvis, Sinatra to Sonny & Cher, this is an astonishing glimpse behind the scenes at the hey day of American pop. “Wonderful, touching and hilarious.” — Elvis Costello.  BUY TICKETS

Heaven Adores You is an intimate, meditative inquiry into the life and music of Elliott Smith (1969-2003). By threading the music of Elliott Smith through the dense, yet often isolating landscapes of the three major cities he lived in — Portland, New York City, Los Angeles — Heaven Adores You presents a visual journey and an earnest review of the singer’s prolific songwriting and the impact it continues to have on fans, friends, and fellow musicians. BUY TICKETS