This year VIFF recruited a talented bunch of volunteer writers to review films, create film lists and interview guests for the blog. All of the engaging content you’ve been enjoying came to us courtesy of these talented folks!

Thank you to our wonderful blog writing team! 👏

Frederick Blichert is a Vancouver-based freelance film critic and arts journalist. He writes film and book reviews, features, essays, and news for various publications internationally. Follow him on Twitter @FABlichert.

Mariam Baldeh is a Gambian multimedia journalist currently pursuing her M.J. at the UBC School of Journalism. She’s lived in 13 countries so far, and when she’s not country-hopping, she’s watching a Shonda Rhimes masterpiece or reading Harry Potter – again. Follow her on Twitter @MariamBaldeh. 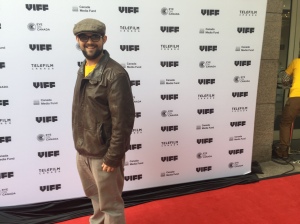 Brent Holmes is a Masters of Journalism student at UBC with a focus on film criticism and data reporting. He has written for The Globe and Mail and The Standard Freeholder. He has worked in various roles at film festivals including DOXA, VIFF, and TIFF. Follow him on Twitter @BrentHolmes240.

Anita Bedell is an MFA candidate at the University of British Columbia. She is a writer of art-house films and fiction currently working on a novel set in the northern oil and gas town where she was born and raised. Follow her on Twitter @endofalice.

Alex de Boer is journalist and nonfiction storyteller interested in art, culture and politics. She currently completing her Master of Journalism at UBC. Find her on Twitter @alexmdeboer.