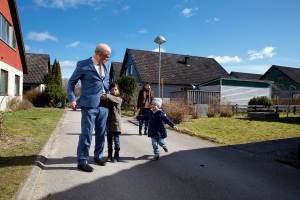 Adapted from Fredrik Backman’s novel, A Man Called Ove tells the story of a curmudgeonly old man whose life changes course unexpectedly, challenging his grumpy ways. With all of the elements in place to make a hokey, sentimental film like so many we’ve seen before, Swedish director Hannes Holm skillfully navigates around the material with emotional tact and sincerity. Rolf Lassgardimbues the titular role with depth and grace. Bent on killing himself in order to end his sad existence and to join his wife Sonja in the afterlife, Ove’s suicide attempts are repeatedly interrupted against his control. Flashbacks from his past string together a series of unfortunate events that explain his present self. What accumulates is an authentic sense of pain that weighs down the tragicomic tone of the film with an emotional anchor.

The fated existence of Ove is not so over the top has to lack seriousness, the comedy here is not directed towards the man’s trials and tribulations in some glib manner, but more so comes from his prickly personality itself. Rolf Lassgard’s nuanced portrayal of Ove begs you to reconsider your assumptions about the unpleasant people you may encounter in your daily life. Everyone’s past is a part of their present, and we may never know what it is that makes people like they are. When a family moves in next door, Ove is given a new chance—no matter how reluctant he is to accept it—to connect with people. The extremely pregnant Parvaneh is the matriarch who doesn’t stand for Ove’s attitude. Her dignified presence threatens Ove’s closed off emotions, as he also gets to know he husband and two children. 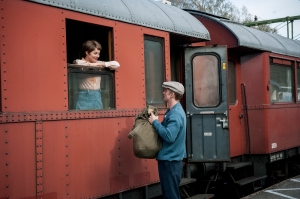 In a general sense, A Man Called Ove’s broad strokes are predictable, but it’s in the details that writer/director Holm surprises. You may be caught off guard with how effectively the flashbacks create a rich sense of how fate shapes a person. A Man Called Ove is Sweden’s submission for Best Foreign Language Film contention at the Oscars, and has a real shot at a nomination. The film balances drama and comedy with the story of an everyman in a way that Hollywood so often tries and rarely succeeds.

“It would have been easy to just let Ove coast by on his amusing grouchiness, but Lassgård lets us see so deeply under that protective exterior. We feel as if we’ve walked a mile in Ove’s shoes and absorbed his catharsis as our own.” —Odie Henderson, RogerEbert.com