The Best of Hot Docs at Vancity Theatre

From July 7-11th we’ll be bringing some of the best of the Hot Docs International Documentary Festival to Vancouver at our own Vancity Theatre—with one very special bonus screening of a Hot Docs’ first original project, In the Name of All Canadians. But first we have some of the biggest hits that graced Toronto screens back in April:

In this feature debut, filmmaker Lucija Stojevic points her camera at an awe-inspiring subject. Celebrated Flamenco dancer Antonia Santiago Amador rose to international fame before abruptly disappearing from it altogether. Why? An abusive marriage that forced her into retirement. Today, the aging Amador has moved on from her controlling partner and is mounting an unlikely comeback. La Chana beautifully mixes archival footage of her at her prime, while documenting Amador’s determined journey back to the dance floor.

How do you put a price tag on art? For the uninitiated, the economy of the art world looks absurd. Pieces by celebrity artists can move for obscene amounts of money, accessible only to an exclusive elite. It’s an unregulated market that continues to further skyrocket out of control. Director Barry Avrich takes an insider look with unparalleled access to the movers and shakers in modern art. World class artists like Julian Scnabel and Marina Abramovic talk openly and Avrich also sits down with collectors and curators across the world to try and make sense of this unsustainable industry—and what it means for the art itself. 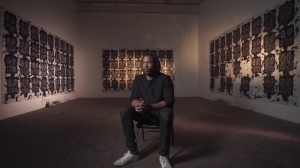 Make sure to make plans to go to Kintaro after this film or else you’ll be left with a craving to end all cravings. Osamu Tomita, Japan’s master ramen chef, guides you through the complex and competitive world of ramen and his philosophy. A celebration of the simplicity and accessibility of this favourite meal, Tomita takes you around to his preferred noodle spots, and expounds on what makes a great bowl of ramen, which in the best Japanese tradition has much to do with purity and simplicity. Feast your eyes on this warm and lively doc and discover the art behind the dish.

Nick Broomfield and Rudi Dolezal take a frank look at the tragic life of Whitney Houston in this unauthorized documentary. From the hood to Hollywood, Houston was a star manipulated by producers into becoming something she wasn’t. To be famous, she had to change, and that tension underlies her entire career. Gifted with rare talent, she wanted to share her voice with the world, but was never able to on her terms. From her rise to stardom, to her storied relationship with Bobby Brown, and her troubled relationship with substances, “Can I Be Me” is the definitive look at one of our greatest fallen stars.

From the makes of Chasing Ice, this is an urgent work of activism. Mass bleaching events are leaving populations of coral reef devastated—and surprise surprise it’s a consequence of rising temperatures. Follow filmmaker Jeff Orlowski and his team of marine biologists and camera engineers on a global journey to uncover just what is happening beneath the surface and what we can do to stop it. Chasing Coral features stunning cinematography and staggering time-lapse footage that reveals the almost spectacular destruction—it’s an image you will never forget.

Not for the faint of heart, The Last Animals documents the impending extinction of the white rhino and the African elephant, victims of the ruthless ivory trade. Made by a former war photographer, Kate Brooks, this film is made with the urgency of a reportage from ground zero, made in the thick of the conflict. Beautifully filmed, Brooks has a poetic eye for imagery, and the dire situation gives the film an intense weight. The Last Animals is at once a work of art and a work of advocacy.

In this very special premiere and a subversive reaction to “Canada’s 150”, Hot Docs unveils its first original commissioned project. Consisting of six short documentaries inspired by Canada’s Charter of Rights and Freedoms, from Indigenous rights to multiculturalism to the controversial ‘notwithstanding clause,’ participating filmmakers have each selected a specific aspect of the Charter to explore, casting a vigilant and often alarmed eye on the creeping authoritarianism of our times. This is an event for all Canadian to mark on their calendars.