The Gateway stream has officially been announced for VIFF 2017! It is the largest annual exhibition of East Asian films outside of the region, and is internationally recognized as one of the most significant in the world. While the program has now been expanded to include visions of the region from around the world, the programmers continue to bring bold, creative and unique work to our audiences in Vancouver. And we are bringing the trailers to you, parked below!

Thrilling and hilarious, this is the story of a family that comes to believe they come from other planets and are here to serve alien agendas. Number one among the crazies is patriarch Juichiro (Lily Franky); he’s the first to claim alien heritage, and he becomes convinced he has to save Earth from destruction. This is a comedy of sorts; you could also call it science fiction. But ultimately it’s so unique it almost resists comparison. It’s a triumph of creativity, and a delight from start to finish.

Angkor Awakens: A Portrait of Cambodia

Zeroing in on the devastating legacy of the Khmer Rouge’s genocidal four-year regime, this is a kaleidoscopic portrait of Cambodia’s brutal past and tenuous future. Balancing historical context with disarming intimacy and continuing the legacy of The Killing Fields, it employs commendable directness to bring the human scale of the nation’s tragedy into sharp relief. “As an analytical narrative of tragedy, testimony and a way ahead, [Robert H. Lieberman’s documentary] has an undeniable power.”–L.A. Times

In Nattawut Poonpiriya’s high-school thriller, kids memorize codes, hijack printing presses and recruit a squad of motorbike couriers–all in order to cheat on their exams. Plotted and paced like a heist film, this also delivers scathing commentary on class and corruption. Should we really be rooting for these kids? However you ultimately answer that, there’s no question that this is a gripping film and a razor-sharp satire. “Ceaselessly entertaining… a relentless, high-octane caper.”–Hollywood Reporter

A master of droll comedy and tricky plotting, VIFF favourite Hong Sangsoo scored at this year’s Cannes with a film about the revered festival itself. Isabelle Huppert, the reigning queen of French actresses, plays the title role. Attending Cannes for the premiere of a friend’s film, Claire meets Manhee (Kim Minhee of last year’s hit The Handmaiden). Bonding, booze and some great laughs ensue. “Easy on the eye and strewn with humorous gems… A short and sweet divertissement.”–Hollywood Reporter

Abandoned by her mom, ‘tween Tomo (Rinka Kakihara) needs a new place to live. Uncle Makio (Kenta Kiritani) is glad to take her in, but offers a gentle warning: his live-in partner is a bit “unusual.” She’s played by Ikuta Toma, one of Japan’s hottest young stars, and he steals the show with his note-perfect turn. That’s right: girlfriend Rinko is a trans woman–a surprise to Tomo and the source of her awakening in Naoko Ogigami’s drama. “Gentle, sweet-souled… a nuanced, softly lit family portrait.”–Variety

Haunting as it is, this is still terrific entertainment—a compelling mystery story, expertly told. Tanaka (Tsumabuki Satoshi of The Vancovuer Asahi, VIFF 14) is a reporter probing the murder of a businessman and his family; as he digs closer to the truth, the distinction between perpetrator and victim gets murky. The film has a core of rage, but everything—including murder—is portrayed in hushed, funereal tones. Morbid, seductive and, in the end, very moving, this is genre filmmaking on a high level.

When a woman goes missing from a small village, cop Kinley (Jamyang Jamtsho Wangchuk) is put on the case, and his number one suspect is sexy dame Choden (Sonam Tashi Choden). Yes, this is film noir territory, but we’re far from the usual hardboiled milieu: the country is Bhutan, the missing woman is a Buddhist abbess and the femme fatale has some very special powers. Sexy, spiritual and beguiling, this film is subtle enough to have you parsing its mysteries long after the case has been solved.

At the height of the DVD boom, a Beijing projectionist holes up in a theatre basement and bonds with his young son by bootlegging and redubbing blockbusters. But the black market is rife with pitfalls for such misguided pirates, ensuring that this open-hearted love letter to cinema elevates its stakes (and charm) with each subsequent scene. Sam Voutas’ wry, nostalgic comedy-drama “highlights the exhilarating, protective and terrifying lengths parents will go for their children.”–Rolling Stone

At once immersive and illuminating, Ramona S. Diaz’s vérité-style documentary plunges us into the workings of the Dr. Jose Fabella Memorial Hospital, one of the Philippines’ busiest maternity wards. The film keenly balances intimate human detail with sweeping Wiseman-like institutional (and cultural) documentation. It’s a compelling, detailed cinematic portrait that’s sobering without ever once feeling grim–a perfect balance for a documentary so steeped in a sense of place. “Lively and engaging…”–Variety

A Special Presentation screening of Okja as part of a celebration of the filmmaking achievements of director/co-writer, Bong Joon Ho. Included in the event is a presentation honoring Director Bong as a VIFF Visionary and an extended, ‘In Conversation’ session presented by IATSE LOCAL 891, with Bong Joon Ho, a VIFF alumnus, and Oscar award-winning VFX supervisor Erik-Jan de Boer of Method Studios.

This special opportunity to see Director Bong in conversation alongside a big screen presentation of his beloved Okja is not to be missed. 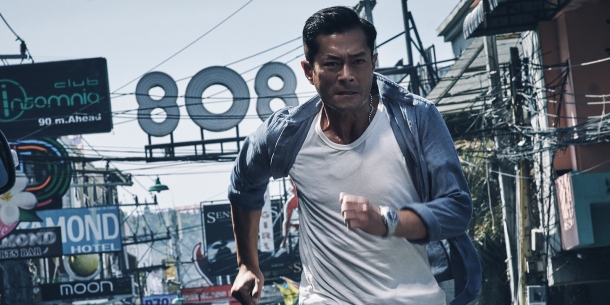 Ace director Wilson Yip, dashing leading man Louis Koo and one of cinema’s greatest action choreographers Sammo Hung team up for this gritty crime thriller. Koo plays a detective who travels to Thailand in search of his missing daughter; there he finds corruption, sleaze and plenty of danger. In the best tradition of Hong Kong action cinema, the film offers colourful characters and good storytelling in addition to the mayhem. Thai martial artist Tony Jaa features in a small but memorable role.

Largely content to trudge through the paces of his boozy, bare-knuckled life–piss-ups, hook-ups and punch-ups are the staples of his weekends–Ryutaro deviates from his debauched routine and willful stagnation to pay a visit to a friend’s terminally ill mother; the reasons he’s avoided this seemingly innocuous encounter for so long are slowly revealed. Director/star Ninomiya Ryutaro draws from true events and real people in his life to guide us through an investigation of Japan’s societal maladies.

Pickle works as a night guard in a foundry, where a giant bronze statue of Buddha is under construction. Belly Button collects scrap by day, and hangs out with Pickle at night. When they discover their well-connected, overly amorous boss keeps dash-cam recordings of his nocturnal prowlings, they become obsessed with his lurid private secrets. Huang Hsin-yao uses the darkest black humour to probe the moral underbellies of Taiwan’s upper and lower classes to hilarious and devastating effect.