B&W By Design at Vancity Theatre

Seventy years ago, black & white was the norm. The influx of colour in Hollywood cinema took place throughout the 1940s and 50s and was cemented as the gold standard by the 60s. Colour gave the filmmaker so much more to work with. It opened up the opportunity to add vibrancy and vitality to the frame. Technicolor offered an aesthetic palette that is still unmatched today. Later, colour meant greater realism and representation of the real world. For a time, it gave cinema a leg up on television the same way the wider aspect ratios that were popularized concurrently did. You can do very different things with colour than with black and white. But by that logic, you can do very different things with black and white than with colour. While cinema is a medium bound to technological advances making it a linearly progressive (and rapidly so) art form, by no means do those advances necessarily qualify as absolute improvements. Fast forward to 2016 and we live in such a diverse age of cinema. And by diversity I’m not referring to the variety of countries producing films, nor the vast expanse of subject matter, but to the form and its material. Digital, 35mm, 70mm, 3D, colour, black and white, widescreen, and even returns to the square academy ratio of yore. Today, it’s about choices. What makes sense for which film?

After colour had replaced black and white as the default format for a film, the latter became a choice that went against the grain (no pun intended). It was cheaper to shoot on black and white film, so many independent filmmakers elected to make their films that way, whether it was French New Wavers in the 60s or Kevin Smith with Clerks in 1994. In the mid to late 70s, when black and white films were thought of as a thing of the past, shooting a black and white film meant harkening back to a gone-by era. Young Frankenstein (1974) uses black and white to reference 1940s horror films. Over the years black and white has risen in popularity as a stylistic choice. The usage of black and white matured in the hands New American Cinema masters like Martin Scorsese (Raging Bull) and Francis Ford Coppola (Rumble Fish). Now several black and white films appear each year, including recent examples such as Polytechnique; Blancanieves; and Love, Theft and Other Entanglements, among many others.

At first glance, colour may seem like more, and black and white like less—but the gradations of gray, from deep, rich blacks all the way to blinding white light, are virtually infinite. The expressive potential of the contrasts therein remains among cinema’s  artistic and aesthetic possibilities. Here at Vancity Theatre we’ll be presenting a series of black and white films that span from 1971 (The Last Picture Show) to the present day (The Embrace of the Serpent) that exemplify the highest achievements in black and white filmmaking.

The series kicks off on June 27th with a screening of Peter Bogdanovich’s classic The Last Picture Show introduced by local film critic Josh Cabrita, and a free screening of A Black and White Night with Roy Orbison and Friends. 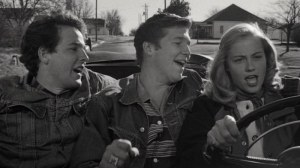 Among the other films screening are:

Embrace of the Serpent

Love, Theft and Other Entanglements

For more information on B&W By Design: Monochrome Movies in the Colour Era, head here: http://www.viff.org/theatre/series/bw-by-design-monochrome-movies-in-the-colour-era