The third stream announced for VIFF 2017 was our Impact stream- 10 uncompromising documentaries that change the way we see the world, sparking discussion and action. They go beyond the headlines to address the personal, political and environmental challenges we face today. You’ll want to see them all but for now just enjoy their trailers, parked below.

“Organic” has become such a garden variety term that few us give much thought to how this movement might’ve originated. Consequently, Mark Kitchell’s insightful documentary makes for engrossing viewing as it retraces the first steps of the motley, rebellious pioneers who thumbed their noses at chemical farming and set in motion a wave of change. Much more than just backstory, Evolution is essential viewing thanks to the glimpses it offers of the sustainable alternatives waiting on the horizon.

Filmed in and around Kodiak, Alaska, this is a beautifully crafted film about resilience, empowerment and community told through the stories of four young women who are fighting to revitalize the Kodiak Alutiiq language. Interweaving personal narratives, local history, interviews with academics and elders, animated Alutiiq legends and footage of various initiatives to teach the language to Alutiiq youth, Karen Lynn Weinberg’s documentary is a celebration of the power of language and culture.

Karina Holden’s urgent documentary charts the drastic decline in the health of our oceans–more than half of all marine life has been lost due to plastic pollution, overfishing, habitat destruction and the expansion of industrialization–sets out the challenges we are facing, and illustrates the opportunities for positive change. Filmed on location in Australia, Hawaii, the South Pacific, the Philippines and Indonesia, Blue is a cogently argued, beautifully shot and truly inspired call to action.

Directed by artist-activist Ai Weiwei and filmed in 40 refugee camps in 23 countries, this stunningly cinematic documentary, reminiscent of the work of Edward Burtynsky, chronicles the staggering breadth of the global refugee crisis with uncommon insight, as Ai’s camera captures the condition of today’s more-than-65-million displaced individuals. “The film is made with deep beliefs in the value of human rights. In this time of uncertainty, we need more tolerance, compassion and trust…”–Ai Weiwei

From the lights of Shanghai’s Bund to its source on the Tibetan plateau, Xu Xin’s beautiful black-and-white documentary follows the entire length of the Yangtze River, providing a panorama of China’s land and people. One of China’s preeminent independent filmmakers has crafted an epic, moving, provocative portrait of China today. We see, amidst China’s progress, those left behind in the margins, scrabbling for life and livelihood. Epic and intimate: an ode to the Yangzte and a lament for its inhabitants. 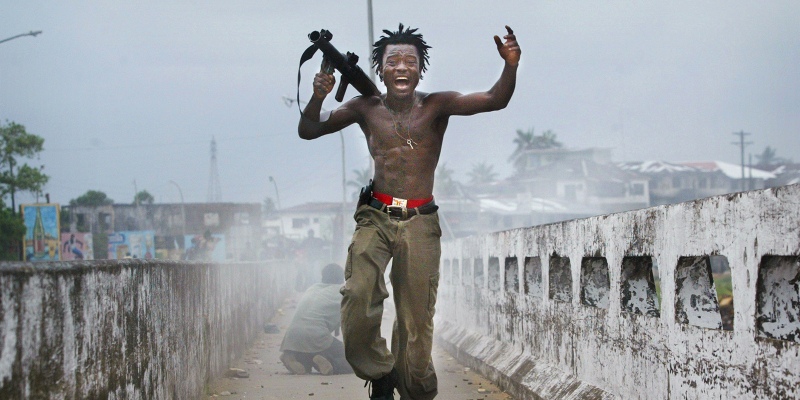 War photographer Chris Hondros was an award-winning legend by the time he was killed in Libya, at age 41, in 2011. Fellow journalist Greg Campbell–a friend who had also worked with Hondros–has fashioned a balanced, deeply researched, and profoundly affecting portrait that shows Hondros in all his humanity. “An eloquent tribute… The film succeeds partly because Hondros was such a gifted war photographer, and partly because of the thoughtful and loving portrait created by… Campbell.”–Hollywood Reporter.

With Ashin Wirathu, a Buddhist monk, unrepentant Islamophobe and avowed Trump admirer, serving as our guide, Barbet Schroeder’s riveting documentary embeds us in a Myanmar where violence–and even ethnic “purifying”–is being fuelled by incendiary religious rhetoric. Supplementing interviews with on-the-ground amateur footage, the veteran filmmaker invites us to stare into the face of intolerance and leaves us questioning whether any of us have the luxury of turning a blind eye to such heinous conduct.

Played by Al Pacino in Sidney Lumet’s Serpico (1973), Frank Serpico was the counterculture hero of the NYPD for his unflinching stand against corruption. Antonino D’Ambrosio’s rewarding portrait includes interviews with Serpico and his colleagues and supporters, including former US Attorney General Ramsay Clark, writer Luc Sante and actor John Turturro. Context is provided via clips from Lumet’s film. “An enjoyable expansion on the fictional account, with a where-is-he-now bonus.”–Hollywood Reporter.

ACORN and the Firestorm

A bastion of progressive activism for 40 years, ACORN was undermined by doctored video footage purporting to show its workers advising a pimp in 2009. A scandalous harbinger of America’s current political crisis, the ACORN affair is recounted in Reuben Atlas and Sam Pollard’s enthralling doc. Polarization, vicious media attacks and the rise of Breitbart: all the key elements of American political malaise are to be found in this tragedy which looks back on the Obama years with an eye towards the present.

The Trial: The State of Russia vs Oleg Sentsov

Currently serving a 20-year sentence as an alleged terrorist, filmmaker Oleg Sentsov was a vocal opponent of Russia’s invasion of the Crimea before being taken by the FSB, tortured, tried and sentenced. Askold Kurov examines the case–using evidence available to anyone–and puts the lie to the government’s position, fashioning a frightening study in corruption along the way. “A scrappy testament to the true nature of the Vladimir Putin regime [that] leaves you with a shuddering chill.”–Variety