VIFF and Vancity Credit Union, VIFF’s Social and Environmental Impact Partner, are excited to announce the winners of the Community Impact Video Competition.

The competition invited community members to submit a short film showcasing the efforts of a local unsung hero who inspires by example and makes a social or environmental impact in the community. The competition was about sharing those stories and celebrating local heroes who go above and beyond in their dedication to building healthier and more sustainable communities.

Submissions were judged on the community need addressed, and the impact of the unsung hero’s philanthropic effort. The jury members included:

The top 3 video creators and community nominees were presented cash prizes at an awards ceremony last night at VIFF’s Vancity Theatre. The individuals/organization profiled in the submission also received a matching donation to support their impact work and the nominee in the 1st place submission will also be featured in a short film commissioned by VIFF. The film will screen in the Vancity Theatre atrium and at select screenings at the Vancity Theatre this autumn.

Subject: For 20 years VANDU has been promoting Inclusion, Health, and Social Justice for people who use illicit drugs in the Downtown Eastside of Vancouver. In the midst of the overdose crisis, they have been working for the safety of the community within a very difficult context.

Nominated by: William (Billy) Grayer “I am a grade 12 student at Britannia. I grew up in the Downtown Eastside and I am concerned with issues of poverty and social justice in our community. I am in IB and I’m taking a film course and play basketball on the senior team at the school.” 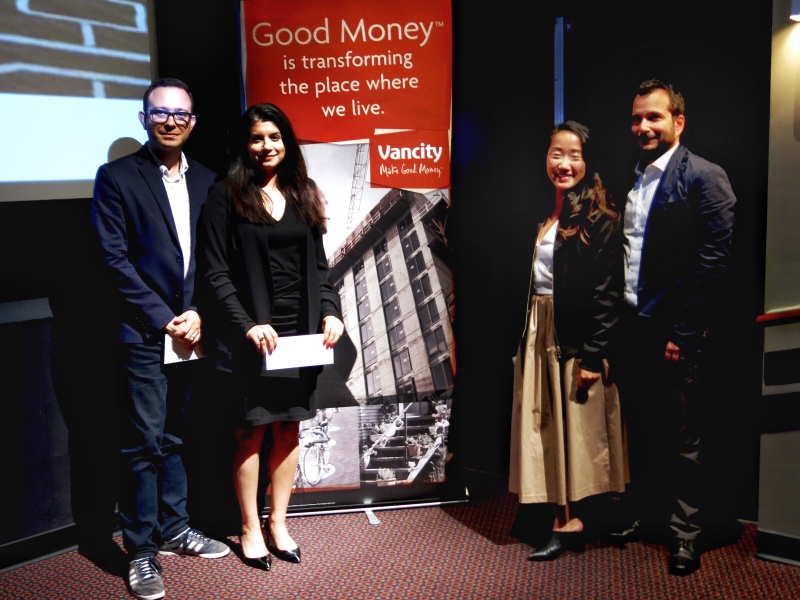 Subject: Founders Anita Cheung and Rachel Ricketts are two women facilitating a safe and sacred space for Women of Colour in Vancouver both in person and online, to come together in solidarity, support and refuge. A place you can speak your peace and bare your soul amidst women who feel, hear and understand your experience. WOC Talks is a night of reflective meditation, intuitive coaching and, most importantly, healing. Featured on https://woctalks.org/ is an online resource guide and will be offering an upcoming mentorship program. Based on personal experience – after attending a WOC Talks event, Anita has felt free to speak about her experiences as a second generation Indo-Canadian. She also had the opportunity to understand how other women of colour feel about their childhood experiences, view points, how people look at them, and how they are treated by their peers. Although she has attended many networking events in Vancouver for women, this was the first time she had been in a room full of women from various cultural backgrounds. This circle of women is extremely powerful because it gives the unheard voice a place to be heard without judgement.

Nominated by: Selena Sandhu “As a communications professional, I have ten years of experience in sales, public relations, and marketing. I am an avid volunteer within communities that empower women and other various philanthropy projects. With the guidance of one of my mentors I created ‘Her Confidence’; an online lifestyle brand sharing wisdom through vulnerability for women loving themselves and regaining confidence after going through a break up”

Subject: Kelsey Evans is a true eco-leader. She diverts materials out of the landfill back into the local community via her sustainable lock up. She also oversees a food donation program where instead of composting, film productions crews wrap up untouched leftovers, refrigerate and are distributed to various organisations including homeless societies.

Nominated by: Synnove Godeseth “I live in Gibsons on the Sunshine Coast with my husband and two children. I co- own a busy film location company and act as a producer and location fixer on various productions. Myself, Rachael Dudley & Arwen Hunter in our spare time are making a documentary on the inspiring Kelsey Evans.“