Your handy one-stop-shop for cinephile news, articles, and videos from the week that was. 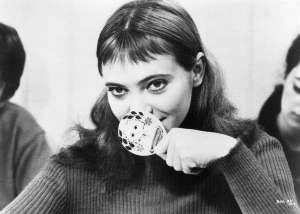 • Anna Karina, the star of French New Wave films like Pierrot le Fou and Bande à part, passed away on Sunday at the age of 79. Over at Criterion Daily, David Hudson has assembled a list of tributes paying respects to the monumental actress.

• Canada’s largest theatre chain, Cineplex, has agreed to a 2.8-billion dollar takeover by the UK-based Cineworld Group. As to what this will mean for the future of cinema exhibition in this country: your guess is as good as mine.

• Film Comment has released their annual list of the Best Undistributed Films of the year, with Russian director Sergei Loznitsa’s State Funeral at the very top. You can check out their number three selection, Abel Ferrara’s Tommaso, when it plays the Vancity Theatre as part of the Italian Film Festival in January.

• “YouTube was privileging a frictionless, addictive viewing experience in order to sell ads.” For The Baffler, Oscar Schwartz discusses the video work of Everest Pipkin and Zoë Sparks, two American artists hellbent on short-circuiting the YouTube algorithm and revealing its prejudices.

• On the occasion of an exhibition of David Lynch’s non-cinematic works (paintings, drawings, lamp sculptures), the Brooklyn Rail’s Phong Bui has gotten a rare, extensive interview with the unclassifiable American filmmaker and artist.

• Last week, I linked to a list of the best experimental films of the decade by Michael Sicinski. Now, for MUBI Notebook, Sicinski ponders the works, artists, and trends that have defined this previous ten years in the avant-garde.

• “A gloomy moon shines on the silhouette of a gloomy castle.” So begins the prose script for Werner Herzog’s eternally creepy Nosferatu the Vampyre, which was recently made available online through Lithub.

• “Looking back on the 2010s, I’m struck by the sweeping changes that impacted me, a Canadian female filmmaker, and my people.” For CBC Arts, Chandler Levack chronicles the last ten years in Canadian film from the perspective of a female director. Whereas Canadian cinema had been previously defined by men like Atom Egoyan and David Cronenberg, Levack argues that, due to institutional changes to CBC and Telefilm, Canadian female directors have flourished in the 2010s, earning widespread acclaim here and abroad.

• A24 has released the trailer for their latest horror film, Rose Glass’ Saint Maud, which premiered at TIFF earlier this year.

• For the past couple weeks, the Film Comment Podcast has undertaken a Decade Project, “where [they] look back at the past 10 years and talk about [their] favorite filmmakers, major changes and trends, and the movies that made a difference. ”