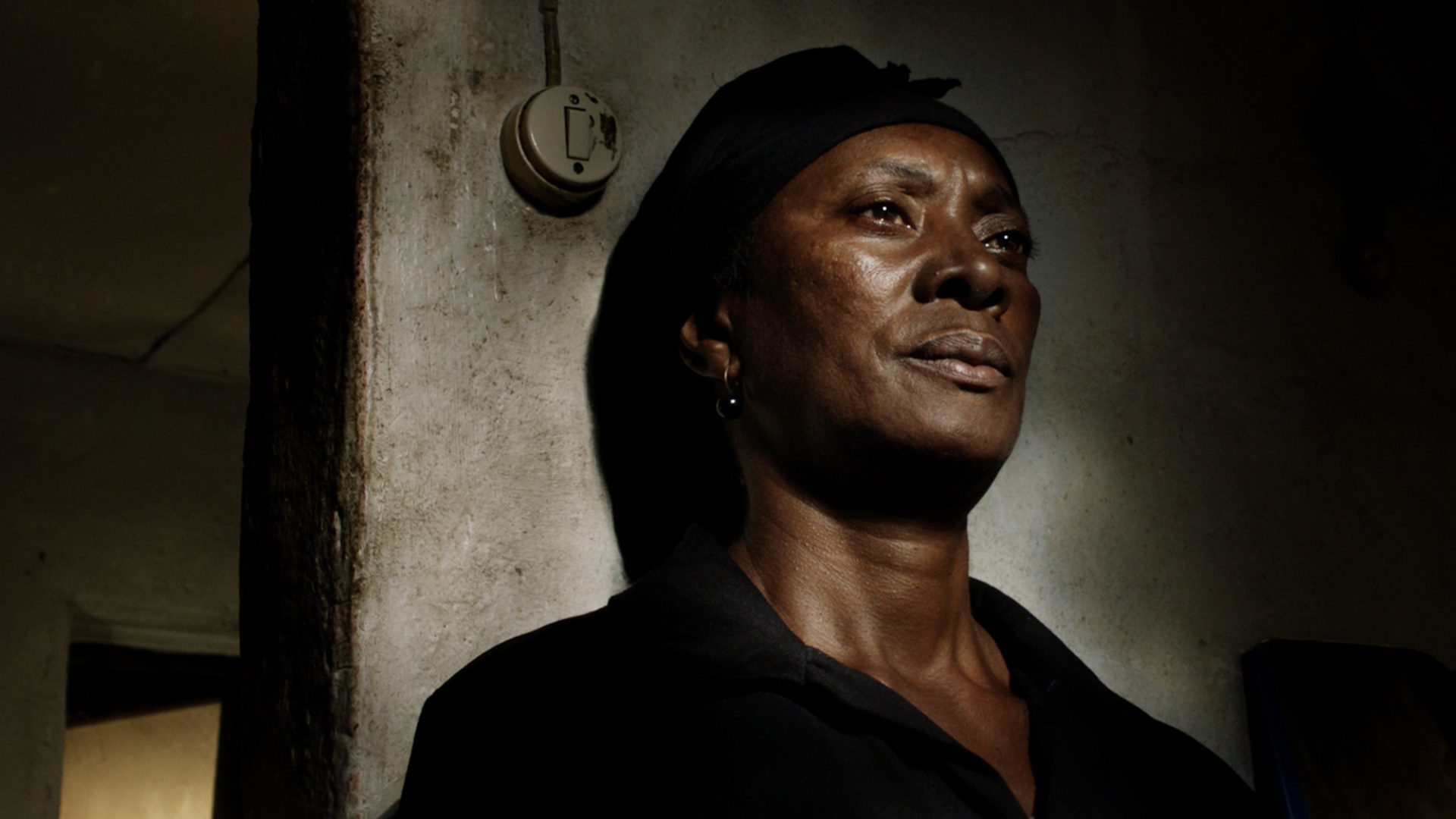 “I arrived in Portugal with a burning fever, soaked, freezing. This was June 30th, 2013. My husband’s funeral had been three days earlier.” Vitalina Varela’s brief cameo in Pedro Costa’s Horse Money (2014) is electrifying. Shrouded in darkness, one side of her face dimly lit, Vitalina immediately stands out in a film almost exclusively about Costa’s regular collaborator Ventura. She so enraptured not only the audience, but Costa himself, that he dedicated his next film to her story—the film that now bears her name, Vitalina Varela.

All of Costa’s major features in the twenty-first century—from In Vanda’s Room (2000) to Colossal Youth (2006) to Horse Money—have been set in the Fontainhas district of Lisbon and feature Cape Verdeans playing fictionalized versions of themselves. Over the course of these films’ releases, and with the help of perspicacious critics and programmers around the world, Costa cultivated a dominant mythology about his supposedly radical political cinema: incrementally shooting these films over years with his actors and subjects (with whom he credits co-authorship) and blending documentary and slow cinema in new and creative ways. The Portuguese director is now acknowledged as one of cinema’s preeminent masters, even if he’s rarely recognized outside of the festival circuit. Vitalina Varela does little to dispel that notion.

It’s important to reiterate that, according to Costa, Vitalina herself is the primary author of a film based on her stories and memories. Along with Ventura, who plays an itinerant priest without a congregation, she essentially is the film. Arriving in Portugal under a shadow of portent—a silhouette in the doorway; a forest of metal and concrete; a slow descent, bare feet wet as if from an oceanic journey—Vitalina meets a group of women who immediately tell her that “your husband has been dead for three days. There is nothing for you here.” A bereaved stranger in a strange land, Vitalina moves into her late husband’s house, which perpetually reminds us of the unfinished business of both the living and the dead. The physical neighbourhood of Fontainhas resembles the structure of memory: jagged, crumbling, patched together, built on failed hopes and dreams of a better future. In the film’s opening passage, a procession of men shamble down a concrete corridor overshadowed by a cemetery. Costa, aided by cinematographer Leonardo Simões, maintains this eerie atmosphere throughout the film, which drifts between light and shadow, dream and reality, presence and absence. In such a disorienting environment, Vitalina serves as our guide, leading us like a thread through the maze of her memory. In building the film on a scaffold of Vitalina’s half-remembered stories, Costa ignores distinctions between reality and unreality, truth and fiction. Instead, authenticity is amplified by artificiality, done in good faith, and Vitalina, who plays a fictionalized version of herself, holds each scene still with her presence even as we can’t help but wonder to what extent her performance is acting or non-acting.

Costa’s work seems to posit that we can never know another, that the cinema cannot transfigure an I-It experience to an I-You encounter or relationship. I use the word “encounter” in a rather particular definition here: I mean to align it with Martin Buber’s use of the word in his work I and Thou (1923). Martin Buber was a Jewish anthropological existentialist philosopher and writer from the early twentieth century. He called himself anthropological rather than theological because he tried to address how humans communicate with God or things of an eternal/spiritual nature, not how God communicates to humans. I and Thou is a dense, short work that is the cornerstone of his philosophy. In it, he describes the two primary human encounters: I-It and I-You. An I-It relation describes a subject-object encounter, where the “It” refers to a static, temporally fixed object; these encounters or relationships make up the majority of human interaction and ultimately lack depth, failing to reveal the whole of the subject or object. Conversely, in the I-You encounter, the You cannot be seen or understood, measured or perceived, but can only stand in relation as something that exists beyond the world of experience. A person can only become a true I, a true self, through relation with a You. In shifting one’s disposition towards the Other from an It to a You, one will not merely see the world or other people  differently, but will witness a spiritual transformation of the metaphysical plane itself.

Perhaps, then, it is significant that Vitalina Varela is Costa’s first film to allude to religion and the presence of God (due to Vitalina’s devout belief). Before, if any spirituality was detected in his films, it was in their pursuit of uncovering mystery in the mundane. As with the work of canonical filmmakers like Ford, Mizoguchi, and Ozu, Costa’s films often culminate with subtle gestures of immense spiritual power. And even though his professed intent is to break free from the traditional apparatus of the business of film (hence his small crew, collaborative approach, long process of immersion) he is still, at heart, a cinephile committed to creating images that search for the ineffable in the ordinary. It may seem odd that he would spend months to years on location, studying the way light files through every crack and crevice of a place, only to eventually build sets and use green screens. But while this may butt against the mythos Costa has cultivated, and demonstrate that he remains more connected to the traditional apparatus of filmmaking than he might care to admit, it also reveals a certain faith some viewers have in a series of production techniques to create “pure cinema,” as though these techniques were, in themselves, an end. Costa’s work is as clear a rebuke to this conflation as Keats’ infamous line from “Ode on a Grecian Urn”: “Beauty is truth, truth beauty.” The introduction of the “artificial,” when finessing the beauty of the film, doesn’t take away from the truth behind Vitalina’s experiences, but reinforces it.

In fact, green screens were used to create one of the most memorable scenes in the film: Vitalina repairing her roof, buffeted by a howling wind, against a faint morning sky. She holds her arm across her brow, shielding her eyes, as if peering at some distant place on the horizon. The gesture, which evokes the disposition of a silent film star (or a John Ford figure), rhymes with the final image of the film: a couple in Cape Verde building a house, and looking off into the distance, as though both Vitalina and the unnamed woman were meeting each other’s gaze. It also recalls a story Vitalina tells early on about the house her husband and she began to build in Cape Verde before he left for Portugal. These two scenes play like a manifestation of Vitalina’s memory or imagination, a rare reprieve in a film mired by bitterness and disappointment. It’s also an instance where Vitalina fully encounters herself, not through a material, spatial reality (there’s no literal “double”), but through a spiritual presence—a glimpse of an I-You relationship with herself. The artifice of movie magic creates a holy moment.

Her capacity to form an I-You relationship is a genuinely startling realization, given that the audience is often stuck at the periphery of the I-It experience. Even as the film captures the emotional weight worn on Vitalina’s face and gleaming eyes, it avoids the inner life of its subject. A scene of Vitalina leaning up in her bed, eyes facing the camera, seems to burst out of the film fully formed as a painting (indeed, it was used as a poster and cover image to promote the film). If the director celebrates her in this scene, he also reduces her to a prop, a model, an object—something that can be used to create image after image. Because Vitalina as a person can only be re-imagined through the prism of the camera, we experience her and her life through a dozen reflections and refractions, oftentimes literal ones, the artificiality of Costa’s frames further belying the protagonist’s impenetrability. Vitalina Varela is an apt title, for the film is her life, her presence, her soul–even though the heart of the matter is always kept a mystery.

Throughout the film, Vitalina reimagines the past, relives it, and changes it. Again, the lines between fact and fiction are useless as categories—so when Vitalina performs certain rituals of mourning that she never had the opportunity to carry out in actuality, they still carry real weight and significance for her. As Vitalina carries out this lirturgy, she embodies both herself and the version of herself she holds in her mind’s eye—her memory is transfigured through the film, and she beholds herself in a new way, as if by grace. The I-It encounter of the self, subject to the constraints of space and time, gives way to the mysteries of the I-You, as Vitalina fully meets herself. In a liminal space between past and present, her current and earlier self are linked. It is as if, throughout the film, she sees through a glass, darkly, but soon shall see face to face.

Vitalina Varela screens on Wednesday, March 11 at The Cinematheque.