Coming soon to VIFF 2014 is a dark and gritty coming-of-age drama called Black Fly. Inspired by true events and directed by Jason Bourque, the film tells the story of Jake, a troubled teen with a father that died in a hunting accident and a mother that took her own life. While Jake escapes his abusive uncle, he gets the opportunity to reconnect with his older brother and their reunion stirs up a fire. Blood may be thicker than water but it’s still blood, and it is messy as hell. 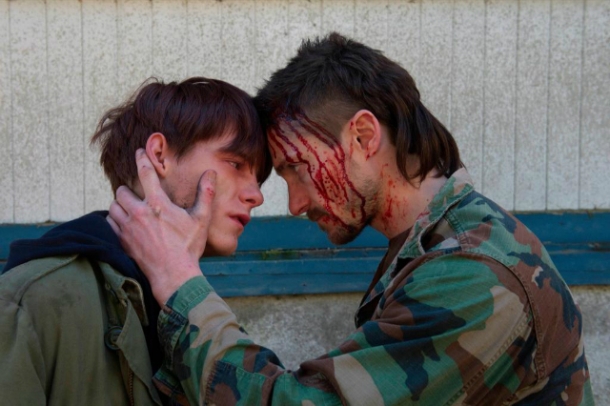 VIFF had a chance to ask director/writer Jason Bourque a few questions that help shed some light on the inspiration for the film. Here is what he had to say:

VIFF: What inspired you to make Black Fly?
Bourque: My inspiration for making “Black Fly” stemmed from my own experiences growing up in rural New Brunswick in the early 80s. My parents were convinced the quiet, picturesque Kingston Peninsula was the ideal place to raise a family but they were horribly mistaken. Noel Winters, our neighbor down the road, was a serial killer and hit man for a biker gang. Being a thirteen-year old kid with a creative streak, that time left an indelible mark on me as an artist.

VIFF: What was the biggest challenge you faced while making the film?
Bourque: We had to shoot on a very tight schedule and I never want to compromise performance. The material was pretty raw at times; it’s an emotional roller coaster. Luckily my main cast had a terrific bond and they were incredibly well prepared.

VIFF: What’s the main message you want people to take away from your film?
Bourque: Black Fly isn’t exactly a “message film”. I wrote and directed it because the story was in me and I felt it should be told. That said, I’m keenly aware of indie films that are so entrenched in an artistic vision, that the filmmaker alienates himself from the audience. I wanted to make an edgy, visceral thriller that ultimately entertains while subverting the typical portrayal of the protagonist and antagonist in these types of genre films. I know it’s not a safe movie and reactions may be extreme. I’m hoping it promotes discussion and I suspect it won’t easily be forgotten. It’s idealistic, but I guess one message would be “Proudly, this is what a team can make with blood, sweat, passion and the support of the Canadian system.”

VIFF: Who is the filmmaker that inspires you the most?
Bourque: A few years ago I probably would have said David Lynch or the Cohen Brothers but now, I feel more inspired by individual films rather than one filmmaker’s body of work.

VIFF: What advice do you have for aspiring filmmakers in BC?
Bourque: For writers, it’s “write what you know”, the same advice passed on to me in a VFS script writing class back in ’96. For filmmakers, “if you believe your story is worth telling, then stay the course”. “Black Fly” took me eighteen years to bring to the big screen. I was able to make it this year because of Telefilm. If they had passed, it would have taken me longer, we probably would have had even less money, but I still would have found a way to make it.

VIFF: When did you know you wanted to be a filmmaker?
Bourque: For me, it’s a simple one. Growing up I didn’t dream of being an astronaut or a marine biologist. As long as I can remember, I always wanted to make movies.

Check out  the trailer for Black Fly here: